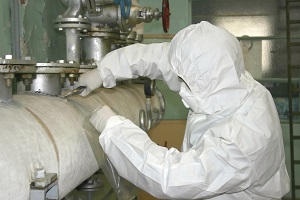 Social housing landlords should have a “legal duty” to undertake asbestos surveys and give the results to tenants and maintenance workers, the Ucatt conference affirmed.

Delegates heard that a number of construction workers had recently been exposed to the deadly substance due to landlords’ failure to share information with contractors carrying out building work.

Alloa delegate Sandy Harrower told the conference that asbestos presented the “biggest occupational risk to construction workers” through the materialisation of terminal mesothelioma decades after the exposure.

A motion passed by delegates says the union will “name, shame and publicise councils, housing associations and private contractors involved in exposing Ucatt members to asbestos.”

Painter Tracey Whittle told the conference how her mother-in-law had been diagnosed with the disease in 2013, despite having “never done a day’s work in her life” in construction.

She was given between three and five years to live, but she died within a few months of first receiving medical care.

Ms Whittle said the government had admitted the navy housing in which her parents-in-law once lived may have been contaminated.[/vc_column_text]