Despite a national clean-up effort two decades ago to eliminate the notorious Mr Fluffy brand asbestos products from homes in Australia, new evidence shows more than a thousand of those homes still are toxic.

Australian Capital Territory (ACT) government officials recently discovered that homes in Canberra, previously deemed safe after asbestos removal programs in the 1980s, still contained asbestos fibres in the walls, under the houses, and inside living spaces.

Exposure to asbestos is linked to the development of mesothelioma and other serious and potentially fatal respiratory diseases and cancers.

Residents of other homes suspected of still containing Mr Fluff insulation were issued letters warning them about the possible dangers of asbestos exposure. while the government is demolishing some Canberra homes, homeowners in nearby Queanbeyan, in New South Wales, report they also have Mr Fluffy insulation in their homes.

Mr Fluffy is a name that strikes fear in the hearts of many Australians because of its tainted history and the countless cases of mesothelioma caused by the company’s asbestos products.

Australia’s high incidence of mesothelioma is related to the country’s extensive use of asbestos. Experts say the country had the highest per capita rate of asbestos use in the World from the 1950’s to the 1970’s.

During the 1960s and 1970s, an estimated 1,000 homes scattered across Canberra and New South Wales were insulated by the Mr Fluffy company. It boasted that its insulation product was the most efficient.

Marketed as “Asbestosfluf” because of its light and fluffy appearance, workers pumped the loose asbestos into roofing spaces. Workers informed the residents the insulation would be eternally effective as previously documented. 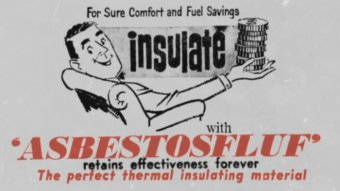 Mr Fluffy workers continued insulating homes with the loose asbestos for another 11 years. Dirk Jansen, the owner of the company, ceased oeprations in the late 1970s and died in 2001.

As the asbestos situation continues to worsen in ACT and New South Wales, another possible disaster is looming in Sydney. Evidence contained in a newly discovered government report suggests another insulation company may have been pumping loose asbestos in Sydney homes for years.

The Mr Fluffy crisis is one that continues to affect Australian families decades after failed cleanup attempts.The current problems show the consequences of when government officials do not take eradication efforts more seriously and ignore health warnings.