This is a fascinating case study within which the specialist skills of Thames Laboratories were tested to the fullest. A number of our surveyors were shipped off to the Antarctic to fulfil much-needed surveys of a key historical site in South Georgia.

The Government of South Georgia, a British Overseas Territory in the southern Atlantic Ocean.

In 2001 we were commissioned by the British Antarctic Survey to undertake a survey at the research station adjacent to Grytviken in preparation of a major environmental improvements program. Alongside this, we were asked by the Government of South Georgia to undertake a review of the asbestos at Grytviken.

The resulting asbestos survey identified extensive asbestos and safety issues that were impacting the local wildlife and threatened visiting tourists. As a result of this, a number of controls were introduced whilst a site remediation strategy was developed.

Over the next 12 months, detailed investigations and reports were prepared with the eventual result being that funding was found to remove the asbestos and other environmental hazards from the site and make safe the collapsing building.

With our experience of the site and the specialist nature of the environment, we were retained to help in the development of an asbestos abatement strategy. Over a period of several months, a number of options were considered and in the end, it was decided that the asbestos removal at Grytviken would be dealt with by the Chilean division of a US-based contractor. These involving project meetings in the United States and briefing with the Foreign and Commonwealth Office, who are responsible for the administration of South Georgia.

In 2003 work commenced with the making safe of the site. As many of the buildings had been destroyed, the work was often out in the open exposed to South Georgia’s bitter conditions. The plan was to make the site safe and retain to wherever possible, the unique history of the site in terms of the equipment that was used. Over a period of 6 months during the austral summer, the work was completed, with the contractors and ourselves leaving the site in 2004. Today Grytviken houses the South Georgia Museum and is visited by several thousand tourists each year.

In 2010 we returned to South Georgia on behalf of the Government of South Georgia, only this time we were assessing the asbestos risk at the remaining Whaling Stations on South Georgia and developed strategies to allow the limited numbers of researchers who visit this wilderness to continue in the work they perform. 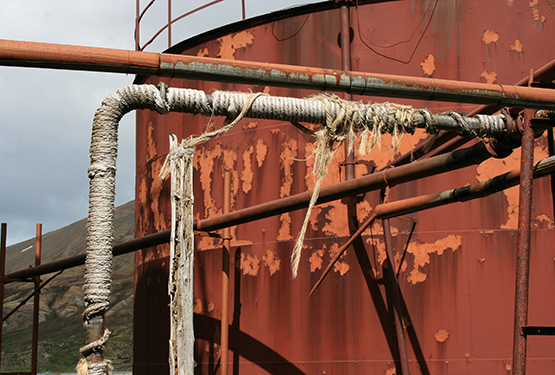 According to World Health Organisation, there are about 125 million people in the world exposed to asbestos at the workplace. In 2004, asbestos-related lung cancer, mesothelioma, and asbestosis from occupational exposures resulted in 107,000 deaths and 1,523,000 Disability Adjusted Life Years (DALYs). In addition, several thousands of deaths can be attributed to other asbestos-related diseases, as well as to nonoccupational exposures to asbestos.